At a great celebration in Cedar Falls, ground is broken on the ambitious Iowa Central Railraod 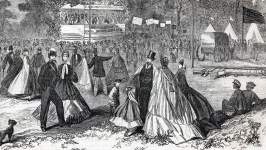 09/19/1865
A massive celebration featuring a 1,500 person parade was held in Cedar Falls, Iowa to celebrate the groundbreaking for the Iowa Central Railroad.  The ambitious project which sought to forge a direct north to south rail link between St. Paul, Minnesota in the north and St. Louis, Missouri in the south was never able to compete fully with east-west lines and in 1912 became part of the Minneapolis and St. Louis Rialroad.  (By John Osborne)
Source Citation
Donovan L. Hofsommer, The Hook & Eye: A History of the Iowa Central Railway (Minneapolis, MN: University of Minnesota Press, 2005), 8.
How to Cite This Page: "At a great celebration in Cedar Falls, ground is broken on the ambitious Iowa Central Railraod," House Divided: The Civil War Research Engine at Dickinson College, https://hd.housedivided.dickinson.edu/index.php/node/44606.