A massive fire in Cincinnati, Ohio destroys the famous 1859 Pike's Opera House and other buildings 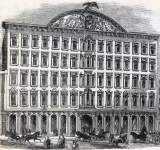 03/22/1866
A massive fire touched off by a gas explosion destroyed Pike's Opera House in Cincinnati, Ohio, along with surrounding buildings along Fourth Street in the city.  Luckily, the explosion happened at around eleven in the evening, well after a crowded performance of "Midsummer Night's Dream" had ended and so, despite the destruction, no serious injuries were reported.  The damage was extensive, however, and was estimated to have cost businesses around 1.5 million dollars. (By John Osborne).
Source Citation
Charles Theodore Greve, Centennial History of Cincinnati and Representative Citizens (Cincinnati, OH: Biographical Publishing Company, 1904), I: 849.
How to Cite This Page: "A massive fire in Cincinnati, Ohio destroys the famous 1859 Pike's Opera House and other buildings," House Divided: The Civil War Research Engine at Dickinson College, https://hd.housedivided.dickinson.edu/index.php/node/45053.