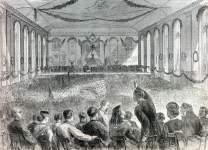 Weeks after the Democratic-supporting veterans had met in Cleveland, Ohio, Republican aligned groups met in their convention in Pittsburgh, Pennsylvania. General Jacob Cox of Ohio was selected as chairman and other distinguished veterans spoke.  Resolutions were passed outlining their complete support for Republican policies, pointing out that only Congress had the right to determine who and how states would be restored to representation in Washington DC.  (By John Osborne)