Texas become the first state to reject ratification of the Fourteenth Amendment. 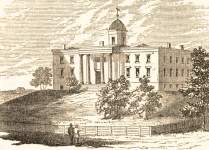 Texas became the first state in the Union to reject ratification of the Fourteenth Amendment when its legislature voted down the measure by wide margins, seventy to five in the state house and twenty-seven to one in the state senate.  Reports of legislative committees stressed that a state's right to determine who would or would not be a citizen was as old as the nation and the federal government held no power to dictate that black Texans were citizens with all the rights that entailed.  The first to reject, Texas was also the last state to ratify the amendment during the nineteenth century, under very different political circumstances, in February 1870. (By John Osborne)

How to Cite This Page: "Texas become the first state to reject ratification of the Fourteenth Amendment.," House Divided: The Civil War Research Engine at Dickinson College, https://hd.housedivided.dickinson.edu/index.php/node/45948.