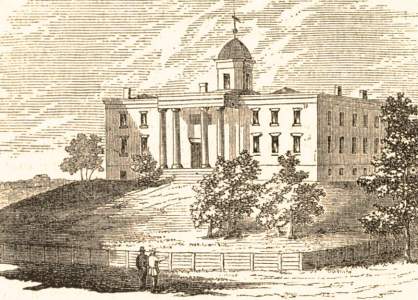 AUSTIN, the capital of Texas, and seat of justice of Travis county, is situated on the northeasterly side of Colorado river, 200 miles northwest of Galveston.
The site is salubrious, being removed from the unhealthy atmosphere of the seaboard. The city is laid out on an extensive scale, with regular streets and avenues, which, when lined with the contemplated rows of buildings, will present an imposing spectacle. At present the buildings are not remarkable for elegance or number. In 1845 a convention met at this place, and organized a state government and constitution, which were ratified by the popular vote in the same year. In 1846 the first state legislature met at Austin, where it has since held biennial sessions. The population in 1840 was about 400; in 1850, 4,346. (Fannings, 1853)