In Iowa, Republicans triumph again in state and federal elections. 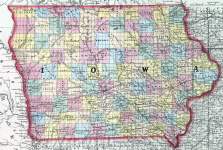 The Iowa state legislature, already under Republican control, was not up for re-election but polling for most other state positions resulted in victories across the board for Republicans. In a hard-fought election with a record turn-out, six U.S. congressional seats were also contested and all six of these Republicans won comfortably.  (By John Osborne)

How to Cite This Page: "In Iowa, Republicans triumph again in state and federal elections.," House Divided: The Civil War Research Engine at Dickinson College, https://hd.housedivided.dickinson.edu/index.php/node/45978.