In Portland, Maine, the state's Democrats meet to nominate candidates for the September elections. 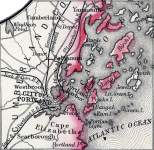 The Maine Democratic Party met in its convention at Portland, recent scene of the disastrous July fire.  The meeting nominated Eben F. Pillsbury as their candidate for governor and passed several heated resolutions, including one condemning the 39th Congress for its "malignant hostility to the cordial reconciliation of the people of the country."  Pillsbury, along with all five Democratic nominees for that Congress were handily beaten in the September 10, 1866 general election.  (By John Osborne)

How to Cite This Page: "In Portland, Maine, the state's Democrats meet to nominate candidates for the September elections.," House Divided: The Civil War Research Engine at Dickinson College, https://hd.housedivided.dickinson.edu/index.php/node/46033.