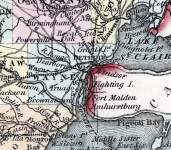 Michigan's Republican Party met in Detroit to nominate candidates for the upcoming state elections.  They nominated as their candidate for governor, Henry Howland Crapo.  The convention also passed a series of resolutions that indicated that the party's political divide with the administration of President Johnson was widening alarmingly.  Crapo and most of the rest of the nominated state ticket were handy winners in the November elections. Crapo, for example, defeated Democratic nominee General Alpheus Starkey Williams 96,746 votes to 67,708. (By John Osborne)