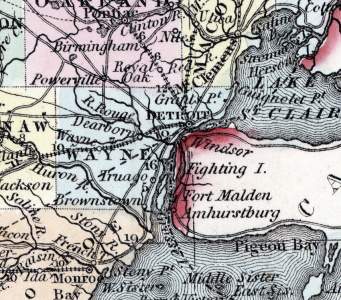 DETROIT, city, and seat of justice of Wayne co., Mich., occupies a pleasant and commanding situation on the west bank of Detroit river, 18 miles from Lake Erie, and 7 miles from Lake St. Clair. Between the two great lakes, Huron and Erie, upon both of which, its vessels carry on an extensive trade, through Lakes Superior and Michigan, and with Canada, Pennsylvania, and New York. It is an important metropolis of the western states, and is destined to a still higher rank than it now holds. (Fanning's, 1853)
How to Cite This Page: "Detroit, MI," House Divided: The Civil War Research Engine at Dickinson College, https://hd.housedivided.dickinson.edu/index.php/node/9163.