The National Unitarian churches of the United States hold their annual meeting in Syracuse, New York. 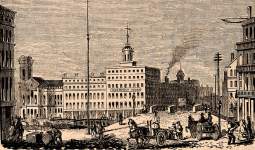 The second annual meeting of the National Unitarian Churches of the United States was held over three days in Syracuse, New York. Approximately 430 delegates represented 176 churches and twelve missionary associations.  The liberal denomination passed unanimously resolutions urging that the national government be "intrusted to the supreme control of those who have proved themselves true to the cause of the Government and the interests of freedom," that black suffrage and human rights be secured, and that the church work so that freed slaves be lifted up "to a higher level of civilized life and spiritual progress."  (By John Osborne)

How to Cite This Page: "The National Unitarian churches of the United States hold their annual meeting in Syracuse, New York.," House Divided: The Civil War Research Engine at Dickinson College, https://hd.housedivided.dickinson.edu/index.php/node/46121.