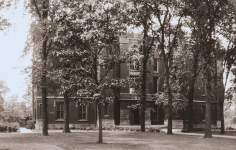 The Universalists of the United States met in their annual General Convention in the Illinois town of Galesburg.  The attendance was reportedly disappointing, with only sixty-six ministers present.  They elected the sitting United States congressman from Maine's second district, Sidney Perham, a long-term Universalist official, as the convention president. The gathering voted to seek closer ties with the Unitarian Churches and then expressed a powerful condemnation of "the disgraceful personal conduct" of President Andrew Johnson and his "manifest sympathy" with former Confederates.  They also voted encouragement to the United States Congress in its counter policies and spoke strongly for "impartial suffrage.".  (By John Osborne)

"Universalists," The American Cyclopedia and Register of Important Events of the Year 1866 (New York: D. Appleton and Company, 1873), 760.