The magnificent Lindell Hotel in St. Louis, Missouri is completely destroyed in an overnight fire. 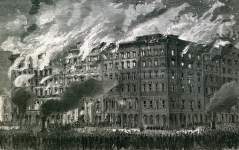 The magnificent Lindell Hotel in the city center of St. Louis, Missouri was completed destroyed by a fire that broke out around eight o'clock in the evening and burned all night.  Opened in October 1863, the building was reportedly the largest building of its kind in the United States but its size told against it when the blaze, which broke out on the fifth floor and spread to the sixth and seventh, was unreachable with the city's firefighting equipment till it was too late.  No serious injuries were reported but the financial loss was estimated in one newspaper as an enormous $1.6 million dollars.  (By John Osborne)

How to Cite This Page: "The magnificent Lindell Hotel in St. Louis, Missouri is completely destroyed in an overnight fire.," House Divided: The Civil War Research Engine at Dickinson College, https://hd.housedivided.dickinson.edu/index.php/node/46430.