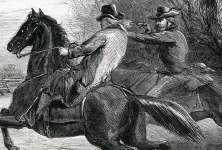 Almon Case was an Ohio-born farmer and state senator in Obion County, Tennessee. He had took up loyalty to the Union after the Battle of Shiloh and had thereby garnered enough hostility in the deeply divided county to be be murdered in cold blood, a few weeks after his teenage son, both by a returned Confederate soldier and former friend named Benjamin Franklin "Frank" Farris. The murders received wide and lurid press coverage in the North and were touted as one more case of returned Confederates acting with impunity against freedmen and Union loyalists.  (By John Osborne)