A strong U.S. naval landing on southern Taiwan to punish Paiwan aboriginals is driven off. 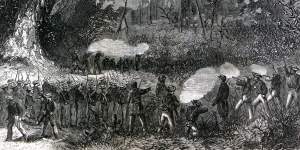 Paiwan aboriginal tribes had massacred survivors of the American bark Rover, wrecked March 13 , 1867 on the extreme southern tip of the island of Taiwan, then termed Formosa.  An earlier and more immediate British naval search had been too small to properly search for survivors and after delays, a powerful U.S. Navy expedition was landed on this day.  One hundred and eight-one sailors and marines from U.S.S. Hartford and U.S. Wyoming under Commander George Belknapp landed where the massacre took place with orders to search for Americans and punish those responsible. The force advanced only a mile into thick jungle and came under heavy attack, losing the expedition's second-in-command, Lieutenant-Commander Alexander S. MacKenzie, shot fatally through the chest.  Further progress was deemed impossible and the landing party, carrying a number of wounded and men suffering from heatstroke, withdrew to its ships and did not return.  (By John Osborne)

How to Cite This Page: "A strong U.S. naval landing on southern Taiwan to punish Paiwan aboriginals is driven off.," House Divided: The Civil War Research Engine at Dickinson College, https://hd.housedivided.dickinson.edu/index.php/node/47643.