The cornerstone of the Soldiers' Monument is laid at Hampton National Cemetery in Virginia. 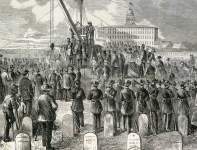 The cornerstone of an eventual seventy foot granite central monument at the Hampton National Soldiers' Cemetery in Virginia was laid with ceremony on this date.  The cemetery already held around six thousand Union remains from the Peninsula Campaign and operations to close smaller resting places at Yorktown, Norfolk, and Portsmouth, Virginia and consolidate bodies at Hampton were underway.  A small number of Confederate dead were also buried at Hampton, in their own section.  (By John Osborne)

How to Cite This Page: "The cornerstone of the Soldiers' Monument is laid at Hampton National Cemetery in Virginia.," House Divided: The Civil War Research Engine at Dickinson College, https://hd.housedivided.dickinson.edu/index.php/node/47655.