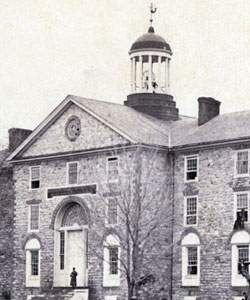 Born in Baltimore and a Dickinson graduate of 1829, Palmer was a distinguished U.S. Naval Surgeon. He was on the United States Exploring Expedition, took part in the Mexican War, and was surgeon aboard the Niagara during the first effort to lay the Atlantic cable. He served with distinction in the Civil War and ended his career as Surgeon General of the U.S. Navy.
Life Span
06/29/1811 to 04/04/1883
Dickinson Connection
Class of 1829
How to Cite This Page: "Palmer, James Croxall," House Divided: The Civil War Research Engine at Dickinson College, https://hd.housedivided.dickinson.edu/index.php/node/6340.