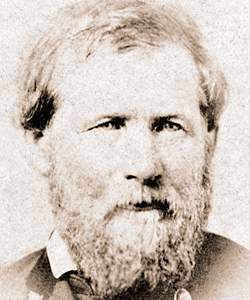 John McAuley Palmer was a founder of the Republican Party in Illinois, a successful Union general, and a politician whose long career culminated in a run for the presidency. He was born into an anti-slavery family in Kentucky but moved with them at an early age to Alton, Illinois. There he was educated and studied law. Of meager means, he had to borrow the registration fee to practice but slowly built a legal and political career, befriending Stephen Douglas along the way. He married Malinda Neely in 1842 and the couple eventually had ten children. Above average height and without ostentation, he sat in the Illinois senate as a Free Soil Democrat. By 1856, though, he was a founder of the Republican Party, chairing the Bloomington Convention and supporting Abraham Lincoln. He was a peace commissioner in April 1861 but when war arrived he took up arms, rising by 1863 to the rank of corps commander. After Appomattox, he was named head of the Military Department of Kentucky where his views on racial justice clashed violently with local attitudes. He returned to Illinois in 1867 and was elected Republican governor. He fell out with President Grant, however, and returned to the Democratic fold, serving as a U.S. Senator in 1890. Always interested in economic matters, he was the presidential candidate of the breakaway National Democratic Party in 1896, campaigning in favor of the gold standard. He died in Springfield of a heart attack in 1900 and was buried in Carlinville, Illinois. (By John Osborne)
Life Span
09/13/1817 to 09/25/1900
How to Cite This Page: "Palmer, John McAuley," House Divided: The Civil War Research Engine at Dickinson College, https://hd.housedivided.dickinson.edu/index.php/node/6341.