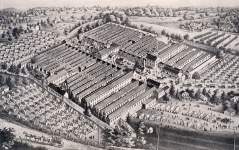 05/08/1865
Although the fighting was at an end, wounded soldiers still arrived in Philadelphia, a major military hospital center through most of the war. The S.S. Benjamin Deford arrived at the port with 351 wounded men from General Sheridan's cavalry aboard.  On the same day, though, eight military hospitals closed their doors for the last time as the bloody cost of the war at last wound down.  (By John Osborne)
Source Citation
J.Thomas Scharf and Thompson Wescott, History of Philadelphia 1609-1884, in three volumes (Philadelphia, PA: L.H. Everts & Co., 1884), 824.
How to Cite This Page: "Hundreds of wounded from General Sheridan's command arrive in Philadelphia via steamship," House Divided: The Civil War Research Engine at Dickinson College, https://hd.housedivided.dickinson.edu/node/43934.