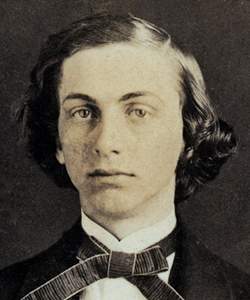 Clarence G. Jackson was born on March 25, 1842 in Berwick, Pennsylvania and enrolled in Dickinson College, at the age of sixteen. Jackson enlisted as a second lieutenant in Company H of the Eighty-fourth Pennsylvania Volunteer Infantry in 1862. He was wounded and captured at the Battle of Chancellorsville and at the Battle of the Wilderness. After the war he became the vice-president of the Jackson and Woodin Manufacturing Company. In 1866, Jackson married Elizabeth Seybert of Berwick and died on May 13, 1880. (By John Osborne and Leigh Oczkowski)
Life Span
03/25/1842 to 05/13/1880
Dickinson Connection
Class of 1860; Trustee, 1875-1880
How to Cite This Page: "Jackson, Clarence Gearhart," House Divided: The Civil War Research Engine at Dickinson College, https://hd.housedivided.dickinson.edu/node/5963.