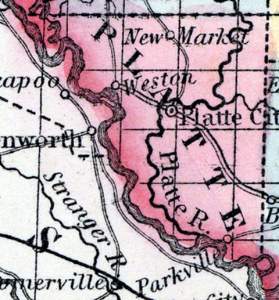 PLATTE CITY, The county seat of Platte county, Carroll township, beautifully situated on the left bank of the Platte river. about 40 miles from its entrance into the Missouri river.  Platte river is navigable for small boats during four months of the year.  It was first settled in 1837, by Zed. Martin, G.P. Daviess, L.D. Johnson, and others.  Platte City carries on an active trade in hemp and other articles, and at present in quite a flouring condition.  There is a prospect of a railroad from St. Joseph to Kansas City passing through Achison, Weston and Platte CIty.  The soil of the country about this town is very rich and productive, and unsurpassed by any in the State.  Hemp, corn, wheat, oats, &c., are the products.  Land improved is worth from $30 to $50 per acre.  It is the seat of two flourishing and admirably conducted Academies -- the male academy under the supervision of Prof. F.G. Gaylord, principal, assisted by Charles Raffington, A. B., the attendance at it being one hundred and fifteen students.  Prof. Hugh B. Todd is principal of the Female Academy, assisted by Mrs. Hannah Creal, and Misses Elizabeth Dakin, Sheba Blanton, and Mollie Chinn, and has an attendance of eighty-four boarders and fifty-six day pupils, making in all one hundred and forty students.  It has one newspaper, viz., the Platte City Weekly Atlas, published by Marsh & Short, one Masonic Lodge, Platte Lodge No. 56, and Nebraska Lodge, No. 12, I.O.O.F., four churches , Presbyterian, Methodist, Baptist and Christian, one plow maker, one architect, ten attorneys at law, one bakery, three blacksmith shops, one boot and shoe shop, two clothing stores, one carding machine, one wagon shop, two drug stores, two flouring mills, seven general stores, two harness shops, two hotels, one jewelry store, one livery stable, one millenary and fancy goods, five physicians, one shingle machine, one stove and tin shop, two tailors, one liquor store, and one saw mill.  Population 1000. (The Missouri State Gazetteer and Business Directory, 1860)