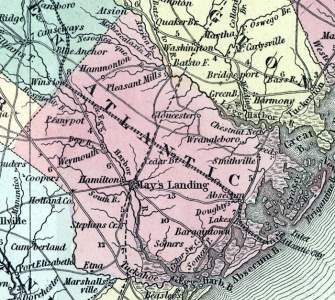 ATLANTIC COUNTY, situated in the southeast part of New Jersey, on the Atlantic ocean, and watered by Great and Little Egg-Harbor rivers. Area, 550 square miles. The surface is generally level, with numerous marches, bays, and islands on the southeast, and a light sandy soil, which is productive only from cultivation. Courts are held at May’s Landing. Pop., in 1840, 8,726; in 1850, 8,962. (Fanning's, 1853)
How to Cite This Page: "Atlantic County, NJ," House Divided: The Civil War Research Engine at Dickinson College, http://hd.housedivided.dickinson.edu/node/15284.