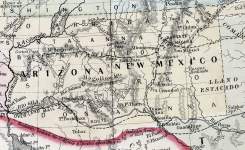 07/08/1859
Sylvester Mowry, an Arizona mineowner and former Army lieutenant who was the elected but unseated congressional delegate from the Arizona Territory, and E.E. Cross, the editor of the Arizonian newspaper, fought a duel near Tubac over comments Cross had published about Mowry.  The duel was fought with rifles and after four shots each from forty paces, all of which missed, Mowry declared that his honor had been satisfied and affair was ended. (By John Osborne)
Source Citation
"Interesting from Arizona," New York Times, August 5, 1859, p. 1.
How to Cite This Page: "Arizona Territorial delegate Sylvester Mowry fights duel with Arizona newspaperman E. E. Cross ," House Divided: The Civil War Research Engine at Dickinson College, http://hd.housedivided.dickinson.edu/node/27944.