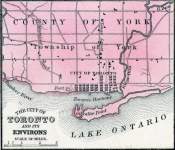 08/03/1859 - 08/04/1859
The representative cricket teams of the United States and Canada met for the sixth annual match in Toronto. The United States gained the upper hand on the first day and eventually won the game on the second day by four wickets.  These encounters were the first international matches in the history of the sport world-wide.  (By John Osborne)
How to Cite This Page: "Sixth annual international cricket match is played between the United States and Canada," House Divided: The Civil War Research Engine at Dickinson College, http://hd.housedivided.dickinson.edu/node/27945.