In Philadelphia, the new Continental Hotel opens for tours by stockholders and the press 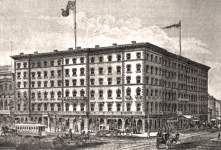 02/13/1860
The new Continental Hotel on the corner of Ninth and Chestnut Streets in Philadelphia was opened first, on this day, to visitors and stockholders.  Six stories high and with rooms for a thousand people, it was then the largest hotel in the country.  It opened for guests three days later.  Abraham Lincoln would stay there in early 1861 on his way to Washington D.C. (By John Osborne)
Source Citation
Francis Vincent, Vincent's Semi-Annual United States Register.... 1st of January and 1st of July, 1860 (Philadelphia: Francis Vincent, 1860), 107.
How to Cite This Page: "In Philadelphia, the new Continental Hotel opens for tours by stockholders and the press," House Divided: The Civil War Research Engine at Dickinson College, http://hd.housedivided.dickinson.edu/node/31244.