In West Bengal, a powerful and deadly cyclone strikes the Indian port city of Kolkata 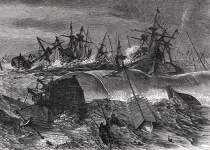 10/05/1864
A hurricane struck the port city of Calcutta in India causing widespead damage and at least fifty deaths in the city alone.  The damage to the two hundred vessels crowded at the port was even heavier, with large ships sunk or thrown up on shore, and several hundred lives lost. The storm struck around eleven in the morning and continued for three hours, destroying thousands of homes, churches, mosques, and gardens. (By John Osborne)
Source Citation
Chronicle, The Annual Register or a View of the History and Politics of the Year 1864 (London: F. & J. Rivington, 1865), 45-47.
How to Cite This Page: "In West Bengal, a powerful and deadly cyclone strikes the Indian port city of Kolkata," House Divided: The Civil War Research Engine at Dickinson College, http://hd.housedivided.dickinson.edu/node/41789.