In France, the Paris Industrial Exhibition is open with items from forty-two countries on show. 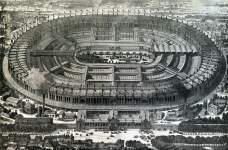 The great Paris International Exposition opened in the French capital and ran from April 1 to November 3, 1867.  It contained items from forty-two countries from around the world with more than fifty thousand individual exhibitors. Housed in a massive purpose built iron-framed structure that ran five hundred yards across Paris' military parade ground, the Champs de Mars, and with four times the display space of the 1851 Great Exhibition in London, the exposition attracted almost ten million people before it closed on November 3, 1867.  (By John Osborne)

How to Cite This Page: "In France, the Paris Industrial Exhibition is open with items from forty-two countries on show.," House Divided: The Civil War Research Engine at Dickinson College, http://hd.housedivided.dickinson.edu/node/46480.