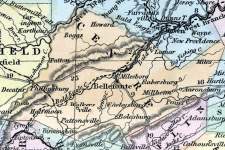 02/16/1859
On this date, the Farmers' High School of Pennsylvania finally opened its doors in Centre County, Pennsylvania.  It had been incorporated in the Pennsylvania legislature in April, 1854, had this authority repealed, and was reincorporated on February 22, 1855. Frederick Watts, a Dickinson College alumnus who had been instrumental in guiding through the enabling legislation, became the first president of the board of trustees of the institution that would grow to become what is today the Pennsylvania State University. (By John Osborne)
Source Citation
Joseph Nathan Kane, ed., Famous First Facts (New York: H.W. Wilson Company, 1981), 6.
How to Cite This Page: "The Farmers' High School of Pennsylvania opens," House Divided: The Civil War Research Engine at Dickinson College, https://hd.housedivided.dickinson.edu/index.php/node/11591.