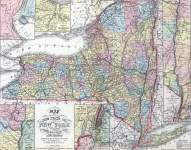 03/18/1859 - 03/20/1859
South-east winds of gale force augmented the normally high spring tides on the Hudson River flooding docks and damaging the railway track that ran along the riverside. A train derailed near Coxsackie, New York in the early hours of the Saturday morning and the engine and cars were thrown into the river. The dock at Poughkeepsie was flooded the same day. No one was hurt in this or other incidents. Similar damage was reported through much of New England, particularly along the upper Connecticut Valley, and bridges were carried away in New Hampshire. (By John Osborne)
Source Citation
"The Spring Freshets," New York Times, March 22, 1859, p. 1.
How to Cite This Page: "Spring tides and high winds cause flooding and subsidence along the Hudson River in New York," House Divided: The Civil War Research Engine at Dickinson College, https://hd.housedivided.dickinson.edu/index.php/node/22657.