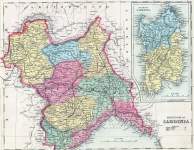 04/29/1859
Austria had issued an emphatic demand that the Kingdom of Piedmont-Sardinia disarm within three days or face attack. Prime Minister Cavour made the Italian reply clear to Vienna on April 26 and three days later, the Austrian Emperor Franz Josef published his declaration of war. This gave the excuse for which Napoleon III and Piedmont Prime Minister Cavour had planned and France came to the aid of the Italians. (By John Osborne)
Source Citation
The Annual Register or a View of the History and Politics of the Year 1859 (London: F. & J. Rivington, 1860), 219-221.
How to Cite This Page: "The Austrian Empire declares war on Sardinia-Piedmont ," House Divided: The Civil War Research Engine at Dickinson College, https://hd.housedivided.dickinson.edu/index.php/node/22957.