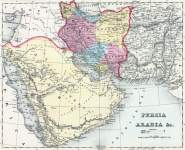 05/28/1859
An underwater cable was laid the length of the Red Sea from Suez to Aden as part of a continuing project to link London with its colonial holdings in India.  The laying operation, undertaken by the company of Newall and Sons, began on May 9, 1859 and was completed in three weeks. The effect of this new section was to reduce the time taken to pass messages between London and India by seven days. (By John Osborne)
Source Citation
Chronicle, The Annual Register or a View of the History and Politics of the Year 1859 (London: F. & J. Rivington, 1860), 69.
How to Cite This Page: "Underwater telegraph line down the Red Sea from Suez to Aden is completed," House Divided: The Civil War Research Engine at Dickinson College, https://hd.housedivided.dickinson.edu/index.php/node/23655.