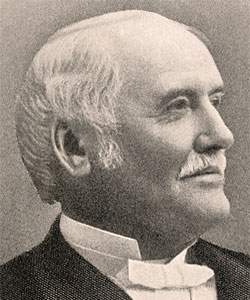 Alexander McClure was a crucial ally to Abraham Lincoln and a force in Pennsylvania politics. He was born in Sherman’s Valley, Pennsylvania to the Presbyterian farming family of Alexander and Isabella Anderson McClure on January 9, 1828. He had little formal schooling but began a long career as a newspaperman when he went to work for a local journal as a printer. Within a few years he had taken over the Franklin Repository in Chambersburg and turned it into one of the state's most influential Whig newspapers. He married Matilda Gray in 1852. By 1855 he had moved towards the Republican Party, attending the state's first convention in Pittsburgh, and then getting elected the State legislature. In 1860, he and Andrew Curtin succeeded in bringing the Pennsylvania delegation at the national convention over from Simon Cameron to Abraham Lincoln. On the outbreak of war, he chaired the state's Senate Committee on Military Affairs and helped Curtin call the influential meeting of “Loyal War Governors of the North,” held at Altoona in September 1862. Confederate forces burned his home in Chambersburg in 1863 and after the war he moved permanently to Philadelphia to practice law. He supported Grant in 1868, but in 1872 led the Pennsylvania delegation to the rival Liberal Republican National Convention that nominated Horace Greeley. Later in life he published works on Andrew Curtin, Abraham Lincoln, William McKinley, and Pennsylvania politics. He died in Philadelphia on June 6, 1909. (By John Osborne)
Life Span
01/09/1828 to 06/06/1909
How to Cite This Page: "McClure, Alexander Kelly ," House Divided: The Civil War Research Engine at Dickinson College, https://hd.housedivided.dickinson.edu/index.php/node/23986.