In Mississippi, the Siege of Vicksburg continues 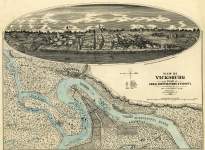 05/26/1863 - 07/03/1863
After frontal attacks had proved far too costly, the Union's Army of the Tennessee's commander, General U.S. Grant, ordered a siege. For the next six weeks, the city, its garrison, and its civilian population suffered from Union mining operations, daily shelling, and extreme shortages of food and medical supplies.  The defenders finally asked for terms on July 2, 1963 and two days later surrendered the town. (By John Osborne)
Source Citation
Michael B. Ballard, Vicksburg: The Campaign That Opened the Mississippi (Chapel Hill: University of North Carolina Press, 2004), 358-395.
Chronicles of the Great Rebellion Against the United States of America ... (Philadelphia: A. Winch, 1867), 59.
How to Cite This Page: "In Mississippi, the Siege of Vicksburg continues," House Divided: The Civil War Research Engine at Dickinson College, https://hd.housedivided.dickinson.edu/index.php/node/29676.