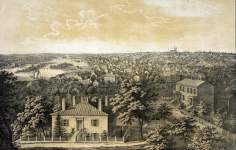 04/05/1861
The Richmond Daily Dispatch, best-selling of the city's four dailies, defended slavery as a financially vital financial.  It concluded, "If we would reduce Virginia to the deplorable condition of anarchy, poverty, and squalid wretchedness, exemplified in the worst Republics of Central or South America, we have but by fixing her destinies with the abolition North, to stampede her negroes and uproot her slave institution."   (By John Osborne)
Source Citation
"To Stampede Her Slaves is to Reduce Virginia to the Condition of a Spanish American Republic," Richmond (VA) Dispatch, April 5, 1861, p. 2.
How to Cite This Page: "Richmond newspaper editorial defends slavery as a vital financial need for Virginia," House Divided: The Civil War Research Engine at Dickinson College, https://hd.housedivided.dickinson.edu/index.php/node/35974.