The Alexandra Case, over British neutrality in ship-building, reaches a verdict in London 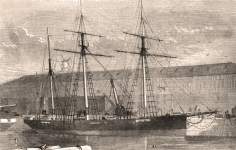 06/26/1863
In a London court case with far-reaching ramifications, the decision in the Alexandra Case went against the British Government.  The Crown had set up a test case over the sale of British-built ships to the Confederacy with the April seizure of the Liverpool-built schooner Alexandra. To the consternation of British and United States authorities, the Crown was unable to win a weak case and the schooner was released. (By John Osborne)
Source Citation
Warren Spencer, The Confederate Navy in Europe (Tuscaloosa, AL: University of Alabama Press. 1983), 100-103.
How to Cite This Page: "The Alexandra Case, over British neutrality in ship-building, reaches a verdict in London ," House Divided: The Civil War Research Engine at Dickinson College, https://hd.housedivided.dickinson.edu/index.php/node/40064.