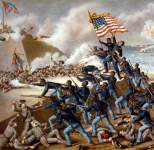 07/18/1863
The 54th Massachusetts, recruited and trained in Boston and made up largely of free blacks from across the country, led the second assault on Fort Wagner.  The brave attempt was thrown back after several hours heavy fighting during which much of the regiment became casualties, including their white colonel, Robert Gould Shaw, killed at the head of his men.  Their efforts, however, were strongly publicized in the North and aided significantly to the growing awareness that African-American soldiers could play a vital role in combat.  (By John Osborne)
Source Citation
Russell Duncan, Where Death and Glory Meet: Colonel Robert Gould Shaw and the Fifty-Fourth Massacusetts Infantry (Athens, GA: University of Georgia Press, 1999), 112-116.
How to Cite This Page: "The African-American 54th Massachusetts earns fame across the North with its brave attempt to storm Fort Wagner," House Divided: The Civil War Research Engine at Dickinson College, https://hd.housedivided.dickinson.edu/index.php/node/40668.