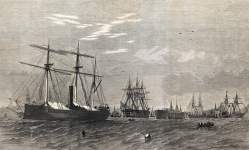 09/04/1863
With Anglo-American relations at a dangerous point due to the continued construction of ships in Britain for the Confederate Navy, Prime Minister Russell ordered that the two latest completed vessels, built at Birkenhead, be detained in the Mersey off Liverpool.  This defused the situation somewhat and Russell finally had the two ironclads purchased for the Royal Navy the following May.  (By John Osborne)
Source Citation
Howard Jones, Blue and Gray Diplomacy: A History of Union and Confederate Foreign Relations (Fayetteville, N.C.: University of North Carolina Press, 2010), 199-200.
How to Cite This Page: "The British Prime Minister orders the detention of two recently British-built vessels for the Confederacy," House Divided: The Civil War Research Engine at Dickinson College, https://hd.housedivided.dickinson.edu/index.php/node/41492.