In Indianapolis, the Indiana Democratic Party holds its state convention 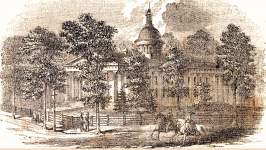 03/15/1866
The Indiana Democratic Party met at its Convention in Indianapolis to nominate a slate of candidates for the year's elections and confirm a party platform.  The gathering reiterated their support for President Johnson, applauded his vetoes, condemned any move towards the African-American franchise, and proposed that money being allocated to the Freedmens' Bureau be instead ear-marked for Union widows and orphans.  (By John Osborne)
Source Citation
"From Indianapolis: Copperhead State Convention," Chicago Tribune, March 16, 1866, p. 1
How to Cite This Page: "In Indianapolis, the Indiana Democratic Party holds its state convention," House Divided: The Civil War Research Engine at Dickinson College, https://hd.housedivided.dickinson.edu/index.php/node/45218.