An American clipper-ship burns in the Pacific leaving her crew in boats thousands of miles from land. 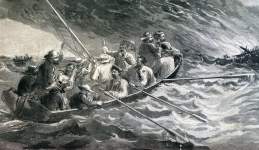 The well-known clipper-ship Hornet had sailed from New York for San Francisco in January but with its voyage almost complete caught fire in the Pacific.  The fire burned all day giving Captain Josiah Mitchell time to get his thirty crew and passengers into three boats.  The boats were seperated but Mitchell's boat, with fourteen men aboard, embarked on an epic 4000 mile voyage, making land safely on June 15, 1866 on the island of Hawaii.  The other boats, with 17 men, were never heard from again.  (By John Osborne)

How to Cite This Page: "An American clipper-ship burns in the Pacific leaving her crew in boats thousands of miles from land.," House Divided: The Civil War Research Engine at Dickinson College, https://hd.housedivided.dickinson.edu/index.php/node/45757.