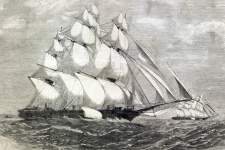 The Great Tea Race of 1866 was a race between clipper ships loaded with China tea bound for London.  Sixteen loaded sailing ships left Foochow in China on the same tide and, remarkably, ninety-nine days and 14,000 miles later three of them, Ariel, Taeping, and the Serica arrived at their docks in London, also on the same tide, The Taeping docked twenty-eight minutes ahead of Ariel. The Taeping, with her 1,108,700 pounds of tea aboard, was declared the official winner but the two ships shared the premium price for their tea, which was the main prize.  (By John Osborne)

How to Cite This Page: "The close-run Great Tea Race between clipper-ships from China to London ends after ninety-nine days," House Divided: The Civil War Research Engine at Dickinson College, https://hd.housedivided.dickinson.edu/index.php/node/45784.