On the Mexican border, U.S. Army troops make a brief incursion into Matamoras 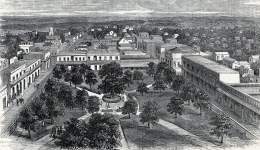 Infighting between the forces of the victorious Mexican Republicans added to the chaos along the Texas/Mexico border. The local commander, named Canares, holding the town of Matamoros against fellow Mexicans loyal to Benito Juarez, appealed to the U.S. Army head across the river in Brownsville to send help "to restore order" in the town.  General John Sedgwick unwisely sent fifty men into the middle of the siege.  He lost patience with the situation after only a few days and forced the surrender of the town to the Juarez forces. General Sheridan reassigned Sedgwick soon after. (By John Osborne)

How to Cite This Page: "On the Mexican border, U.S. Army troops make a brief incursion into Matamoras," House Divided: The Civil War Research Engine at Dickinson College, https://hd.housedivided.dickinson.edu/index.php/node/46069.