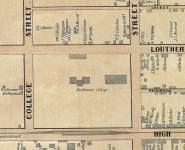 Born in British Guiana, Henry Vethake had graduated from Columbia and then taught mathematics at Queen's College and at Princeton before becoming professor of mathematics at Dickinson College in Carlisle, Pennsylvania in 1821.  In addition to mathematics, Vethake lectured in "Political Economy," among the very first in the United States to do so and that title was added to his appointment in 1826.  He left Dickinson after a decade to return to Princeton and later served an extended tenure as provost of the University of Pennsylvania in Philadelphia where he died at home, aged seventy-five.  (By John Osborne)