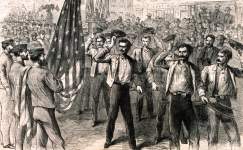 A parade of Charleston firefighters, led by the Stonewall Jackson Company, had just begun their parade through the city when local Union commander General Daniel Sickles halted them and told them they could not continue without finding a United States flag that would be displayed, head the marchers, and be saluted by all who passed.  Although some Northern newspaper reports gave emphasis to later complaints and some participants went home, the flag was found and reportedly the firefighters, largely ex-Confederate soldiers, respectfully saluted.  (By John Osborne)