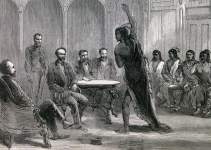 The Hancock-Custer Campaign against the Native Americans of the northern plains obstructing the construction of the transcontinental railroad and emigration west had been an ineffective failure. Changing tactics, the United States Congress authorized the formation of an Indian Peace Commission to negotiate treaties with the Sioux, Cheyenne, Kiowa, and their allied tribes.  The commission met on August 6, 1867 in St. Louis, Missouri and named the sitting Commisioner of Indian Affairs, former Congressman Nathaniel Green Taylor, as its chair.  Most of the rest of the commission was comprised of active and retired military men, including Generals W.T. Sherman, W.S. Harney, A. H. Terry, and J. B. Sanborn. along with a sitting U.S. senator, John B. Henderson of Missouri.  Their efforts resulted in the Medicine Lodge Treaty of October 1867 which set up tribal reservations in Indian Territory (present-day Oklahoma) designed to remove hostile tribes from the path of western expansion.  (By John Osborne)