Democrats sweep to victory in the first state elections under the new Maryland constitution. 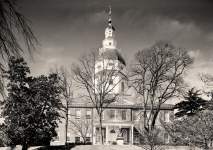 A constitutional convention made up entirely of elected Democrat delegates had formulated a new ruling document for Maryland over the summer and it came into effect on October 5, 1867.  The first state wide elections under the Constitution of 1867 were held on this day and resulted in smashing victories for the Democrats as the white population, still significantly ant-Union, turned against the Republican Party.  Oden Bowie, the Democratic candidate, received around three quarters of the just over eighty-five thousand ballots cast across the Commonwealth.  Under the constitution, Bowie would not take office until January 1869 but Republicans would have to wait until 1896 for another of their party to sit in the governor's mansion. (By John Osborne)

How to Cite This Page: "Democrats sweep to victory in the first state elections under the new Maryland constitution.," House Divided: The Civil War Research Engine at Dickinson College, https://hd.housedivided.dickinson.edu/index.php/node/47776.