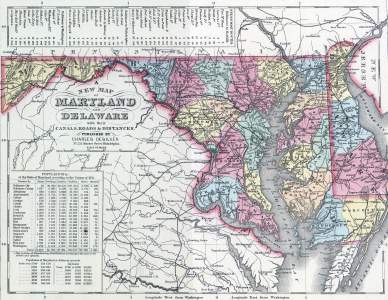 It is usually designated as the southernmost of the Middle States, lying on the Atlantic coast;... The present boundaries of the state are as follows: north by Pennsylvania, east by Delaware and the Atlantic Ocean, south and west by Virginia, from which it is divided by the River Potomac. Its form is extremely irregular. Chesapeake Bay, passing through the state from north to south, near its centre, separates it into two sections, which are known respectively as the Eastern Shore and the Western Shore. (Gazetteer of the United States of America, 1854)
How to Cite This Page: "Maryland," House Divided: The Civil War Research Engine at Dickinson College, https://hd.housedivided.dickinson.edu/index.php/node/8996.