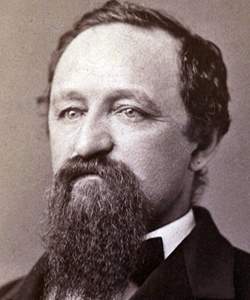 The hard-driving Charles Albright packed the fifty years of his life with action. He was an ardent free-soiler from his youth, rose to command a brigade during the Civil War, served in Congress, and made a fortune as a ruthless corporate lawyer in the Pennsylvania coalfields. The son of a prosperous Berks County, Pennsylvania farmer, he attended Dickinson College and studied law. Always restless, in 1854 he led a company of anti-slavery and pro-temperance Pennsylvania families on a trek to settle Kansas. This kind of drive was handily harnessed during the Civil War. He took command of his 132nd Pennsylvania Infantry Regiment on the battlefield when his senior officers were killed and later commanded a brigade at Chancellorsville. Late in the war, he led the defense of the vital Manassas Gap railway line from Confederate raiders. There he had a brief and violent college reunion in April 1865, meeting a raid from cavalry under Captain George Baylor, class of 1860. Following the war, Albright served a term in Congress as a Republican and became counsel for the Lehigh and Wilkes-Barre Coal Company, where he was especially active in leading the industry’s resistance to the labor agitation of the "Molly Maguires" during the 1870s. All this brought him considerable wealth and an impressive mansion in “millionaire’s row” on Broad Street in Mauch Chunk. Always a devout Methodist and non-smoking teetotaler, Albright died at his home in September 1880 after several weeks of serious illness. He was forty-nine years old. (By John Osborne)
Life Span
12/13/1830 to 09/28/1880
Dickinson Connection
Class of 1852; Trustee, 1879-1880
How to Cite This Page: "Albright, Charles," House Divided: The Civil War Research Engine at Dickinson College, https://hd.housedivided.dickinson.edu/index.php/node/4962.