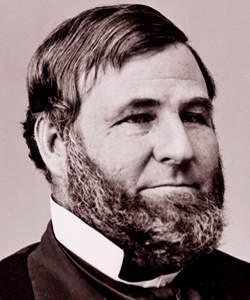 David Davis was a close friend of Abraham Lincoln who worked behind the scenes at the 1860 Republican Convention on Lincoln’s behalf and later became a Supreme Court Justice. Davis held beliefs that fell somewhere in between the two polarized factions of abolitionists and slave owners. He would have welcomed slavery’s demise had he not felt that its end would signal the inevitable death of the United States. Born on March 9, 1815 to a slave-holding family of Maryland, Davis progressed through school in Maryland and after an apprenticeship and one year of law school, he moved to Pekin, Illinois and began to practice law even though he lacked a law degree. Although not always a large man, in his late twenties Davis ballooned in weight to over 300 pounds. In 1848 he attained the position of judge in the eighth circuit of Illinois where he worked with Abraham Lincoln and formulated a strong friendship. In 1860 Davis worked as Lincoln’s campaign manager in his campaign for president and was crucial to his success. Thus in 1862 Lincoln nominated Davis to the Supreme Court and Congress confirmed. Most remember Davis for one case, Ex Parte v. Milligan. In Milligan Davis went against his party and Lincoln by ruling Lincoln’s suspension of Habeus Corpus to be unconstitutional. Davis left the Court in 1876 and served one term as Senator from Illinois. He then retired to his home in Illinois where he died in 1886. (By David Park)
Life Span
03/09/1815 to 06/26/1886
How to Cite This Page: "Davis, David," House Divided: The Civil War Research Engine at Dickinson College, https://hd.housedivided.dickinson.edu/index.php/node/5540.