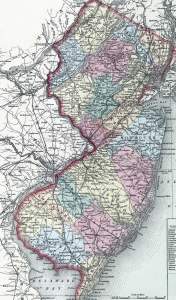 Population. — The character of the people has undoubtedly been essentially modified during the lapse of the several generations that have successively followed in the train of time, since the date of the earliest settlements. But few of the characteristics of the original emigrants from the north of Europe are now discoverable. Most of the inhabitants probably are of English extraction. The last census (1850) shows a population of near 500,000, including about 22,000 free colored persons. (Gazetteer of the United States of America, 1854)
How to Cite This Page: "New Jersey," House Divided: The Civil War Research Engine at Dickinson College, https://hd.housedivided.dickinson.edu/index.php/node/8999.