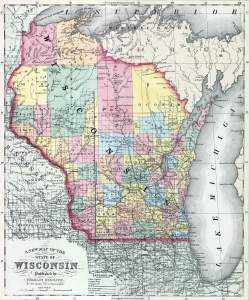 By reason of its contact with Lake Michigan...together with its extensive means of inland navigation, Wisconsin enjoys great commercial facilities. On the margin of the above lake lies Milwaukie, the most thriving and populous town in the state, which has sprung into being and importance, almost magically, within a very few years, and has rapidly become the centre of a vast amount of trade. Possessing the best harbor between Green Bay and Chicago, it is the chosen resort of most of the steamers from Buffalo and other ports on Lake Erie, thus commanding a controlling interest in the entire business of the state. Madison, the capital, is situated on a beautiful elevation, midway between Lake Michigan and the Mississippi ... (Gazetteer of the United States of America, 1854)
How to Cite This Page: "Wisconsin," House Divided: The Civil War Research Engine at Dickinson College, https://hd.housedivided.dickinson.edu/index.php/node/9075.