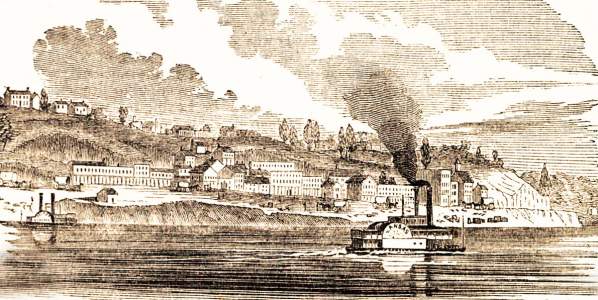 KANZAS(sic), a pleasant post-village of Jackson county, Missouri, on the Missouri river, three-quarters of a mile below the mouth of Kanzas river, and 14 miles W. from Independence. It has a good landing, and an active business. Great numbers of emigrants pass through this place. It contains several churches and (in 1853) about 1000 inhabitants. (Baldwin & Thomas, A New and Complete Gazetteer of the United States ... 1854)

KANSAS CITY, An important city of Jackson county, Kaw township, situated on the Missouri river, three-quarters of a miles below the mouth of Kansas river, and near the western boundary line.  It is the western terminus of the Pacific railroad, which is rapidly pushing forward to this point, and is also on the line of the Great Pacific railroad.  There are few cities in the west that have grown so permanently and rapidly as Kansas City.  The situation is elevated and picturesque, commanding a fine view of the river and of Wyandotte City, Kansas.  The style of buildings are good, chiefly brick, beautifully designed, and substantially built; the streets are wide and well improved.  It has several churches, viz., Methodist, Methodist (North), Baptist, Presbyterian, Episcopal, Reformed, and Catholic, two daily newspapers, viz., Western Journal of Commerce and Metropolitan, four weeklies, viz., Western Journal of Commerce, Western Metropolitan, Free State Republican, and Missouri Post (German), two banks, (Branch of Mechanics' Bank and Branch of Union Bank of Missouri,) one Banking Office, a board of trade, one local Insurance Company, and several benevolent and literary societies.  Its manufactures consist of agricultural implements, boots and shoes, ale and lager beer, brick making, book-binding, brooms, cabinet furniture, carriages and wagons, clothing, confectionery, harness and saddles, marble, pumps, sash, blinds and doors, lumber, soda water, tin and copper ware, leather, tobacco and cigars, soap and candles,&c.
There are about one hundred stores of various kinds, one large flouring mill, one foundry and machine shop, and one of the most extensive and best arranged pork packing establishments west of St. Louis.  Kansas City has an extensive and important trade with Santa Fe, New Mexico, and a large portion of Southern Kansas.  Population 8000. (The Missouri State Gazetteer and Business Directory, 1860)